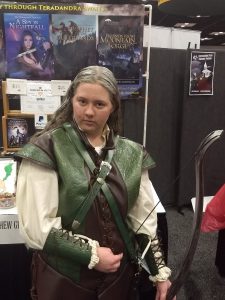 This summer has been amazingly busy for me and the creative consultant.  There have been a number of events that we’ve attended both locally and abroad not the least of which was GenCon 2018, but more on that later.

The highlight of the summer thus far has to be my recent trip to India.  Because of recent changes in my job, I was given the opportunity to travel to our remote partner’s office in Cochi India.  It was here that I got to meet, some for the first time, around 30 co-workers who partner with my organization to support our IT department.   Many of these fine people I’ve had the pleasure to talk to for years via internet conferencing, but I have never met face to face.

The seven days I spent there were both amazing and overwhelming as my friends treated me like a superstar.  Most of them knew that I had written several books, and a few lucky (or unlucky, depending on your perspective) had received copies of one of my books.  In an effort to set things straight, I had planned a surprise for them.  I had ordered in advance a case of books and had them drop shipped directly to the office there.  Then during my last day there, I treated the team to donuts and a complementary book signing.  View all the pictures here.

Signing a flurry of books for my friends.

Everybody, had a great time and everybody got at least one of my books.  There was one special individual who went above and beyond the call of duty during my trip there and made my stay a world-class affair.  Arjun earned, and that’s putting it lightly, a full set of the Silverwood Chronicles.

In case you noticed, it also coincided with a traditional celebration at the office, so in the spirit of cooperation, I dressed up in a traditional dhoti.  You can go to my India Gallery to see many more of my friends. 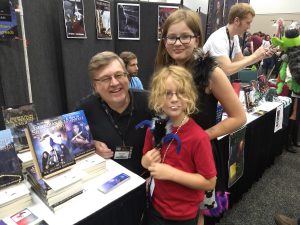 Fans of Chel & Riley and the Silverwood Chronicles

A close second to this was my opportunity to show my books at GenCon 2018, the greatest four days of gaming.  The CC (creative consultant) stepped up her game and cosplayed Taya from the Silverwood Chronicles.  We also meet some repeat friends from the recent InconJunction event who were ready to by the next book in the series. 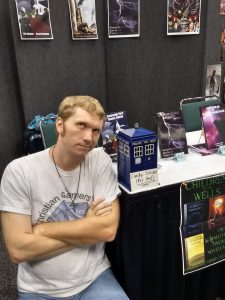 Nathan and the Candy Conspiracy

We also got to share some time with other great authors.  I was very blessed to be near some great people that were there not just to sell books, but where very much interested in establishing relationships and having a good time.  Nathan was once such author.  He had a gimmick that included a cookie/candy jar in

the form of a TARDIS (Dr. Who’s famous time machine).  We got hours of comedy from the fact that no matter how hard Nathan tried, guests at his table were intimidated by the candy offered and had to be compelled to open the lid and see that there was indeed candy inside for the taking.  Thanks Nathan Marchand for the many laughs and being a great sport about it.

Coming up next is MakeVention and the Indy Toy and Comic Expo at the Bloomington Convention Center, August 25 and 26th.  Come see us there if you can.