Prophet to the Outerlands 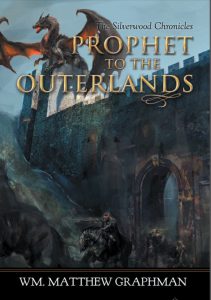 On their way to meet up with an ancient dragon, Guntharr, Taya, Firebane and the others encounter a group of elves taken captive by a small army of barbarians.   Concerned for their possible allies, Guntharr breaks from the group to try and discover what fate would befall them.  Firebane, now in charge, must lead the group without the help of Rift through a dangerous dungeon in order to recover a coveted treasure that their dragon host requires to secure an audience with him.

Elsewhere, Rift, compelled by a longing to return home and a fear that his life is nearing an end, journeys back to Wolf Valley to spend his last days along-side his family.  Rift’s warm welcome is cut short when he discovers that his oldest son has been missing for weeks, presumably out searching for him.  Instead, his youngest has been trying to hold things together with the council of wolves and Rift’s return sparks a controversy which ends with his arrest and subsequent trial.

As Rift stands to defend himself, Raskin makes a heroic appearance, risking his life to alert Rift that Guntharr and the others are in deep trouble and require his assistance.  Accepting banishment from Wolf Valley, Rift recruits his family and follows his feathered friend into the wilderness to a long forgotten fortress.  There, Firebane and the others fail to rescue Guntharr and the elvish allies from the clutches of an evil enchantress who has mastered the power of the green gem.  Her first act with this newfound power is to return a certain wizard back to life.

With Guntharr now under the sway of the enchantress, Firebane’s faith and courage are taxed to the limit as he also must battle the persuasion of the enchantress and hope against all hope that he can find a way to free them all and recover the next piece to the Talisman of Alterian before all is lost.