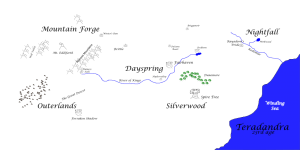 I, Firebane, servant and priest of the One True God and scribe to the Queen of Silverwood hereby write unto leaders of the five realms the events that led up to the reign of the queen, so that you will know that the prophecies written by Krythurian have come to pass and that the One True God has established peace in the realms through His servant the Queen of the Silverwood.
In all of Teradandra, the realms have long struggled against the dark forces. To the realm of Nightfall, you who have spawned the darkness and have forsaken the One True God. Your minions have squashed and flooded the realm with despair and grief. Though the forces of light contain you, your devotion to the gods of darkness and of this world keep you from seeing true peace. You have been cursed from the beginning because it was in your gardens and in your streams where darkness was first revealed to Teradandra. The Orcs, Goblins, Emilatoss, Talicrons, Gravekites and others thirst for destruction. You who dwell in Nightfall long for the blessings of day, but you surround yourselves with only darkness. The throne of Silverwood will ever stand against you and cause you to fall. Your paths will only lead to an end full of misery and woe.
Now, come to the light declares the One True God. Not to destroy it, but to embrace it. For the One True God has love for all created things and to all the lands of Teradandra does He extend His arms. His compassion is never ending, but He must be approached with humility and a willingness to change. Though it may seem like you have not the strength to change, He will give you strength. He will make you like the beautiful flowers of the south.
To the creatures of the realm of Mountain Forge. Your love for the One True God has been resilient through the dark days. But, you grow weak and tired in your own strength. Find rest in the One True God. Let Him be your strength as you withstand the attacks from both without and within. The Wolves, Hawk Lords and Centaurs have allowed your clans to fall into disobedience. You’ve rested in your successes across the years and your children and their children have since forgotten who the One True God is. A friend yet remains in the clan