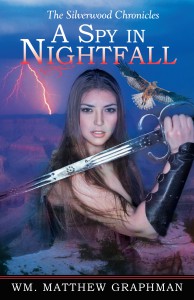 Six months have gone by since Taya, Guntharr and the others recovered the damaged Talisman of Alterian, the only hope to proving that Taya is the rightful heir to the throne Silverwood. With little to go on, Father Firebane sets out with Rift the Battle Wolf to a far away monastery where the high priests of the elves would store copies of their ancient writings. Uncovering a potential lead, the two make their way back to the Sanctuary at Brittle when they are ambushed by a barbarian and rogue Battle Wolf that is familiar with Rift and his clan.

Elsewhere in the world of Teradandra, a faction of elves that survived the assault that ended the reign of Silverwood, struggle against an unknown plague that is threatening the outpost’s existence by killing off the crop that they use to sustain themselves. While trying to hold off increasing attacks from the dark creatures of Nightfall and with little men to spare, General Alderthorn sends out a trio of men, lead by his only son, Farrian, to search out a gifted spy who can infiltrate the land and discover the source of the plague.

Farrian discovers the location of a possible spy for hire in a far away town of Brittle. Guntharr’s suspicions are aroused as rumors have surfaced throughout the five realms that certain elf groups have forsaken the kingdom of Silverwood and pledge loyalty to no one. Farrian’s pleas for help conflict against Guntharr’s commitment to protect Taya at all costs, but then news recovered by Firebane hints that the next piece to the Talisman may reside within the boundaries of Nightfall. Arnethia’s drive to prove herself combined with the need to find the missing piece cause Guntharr to relent and follow the elves back toward Nightfall knowing they could be walking into a trap.

Once there, the Guardian and the General square off in a battle of wits only to be interrupted by an attack on the village by a horde of goblins, trolls and a sorceress who wants Taya dead. Without a plan, Arnethia hurries off on her mission into the land of Nightfall to uncover the whereabouts of the gem and possibly the cause for the General’s plague. Her persistence pays off, but in the process she is captured by a pair of creatures that have the ability to change into any living creature that they’ve come in contact with.

Captured and surrounded by an army of evil, Arnethia must overcome her fear and tap into a new resource that she didn’t know she had to prevent tragedy from happening to her friends and return the second gem to the talisman.